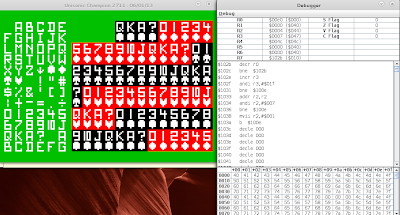 Here is something you can actually download and play with. It is very dull but then again it's only a 50k download. It requires Java 6 or better. I've only run it on Linux, but the bit that might give problems (the sound generation) has been tested on a Windows platform and appears to work fine).

The download (http://www.robsons.org.uk/Gimini/gimini1.zip) contains three files - a jar file, an object file and and assembly source file of the demo program. If you run the jar file (java -jar gimini.jar) it displays the screen(s) you see above.

If you then run it (either press F11, or Run from the Debug menu) it will show the screen on the left, and play the three tones one after the other , changing about every second. If you press one of the control keys (QW for Player 1, OP for player 2) a white block will appear in the gap on the screen at the top in the middle.

Only one catch-ette - for those keys to work the Display window needs to have the focus, not the debugger window. The program will still run with the display window not having the focus, but it doesn't handle the keyboard.

L8R: Tested on Windows XP/Java 7 on VirtualBox, seems to work fine.
Posted by Paul Robson at 05:39