Day 4 : Sticking all the bits together 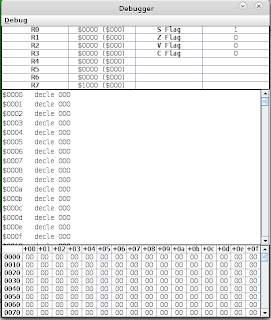 As I wrote before, I do have a simple Debugger Framework that you can just plug an emulator class into.

This (on the left) is the result. It is pretty basic, but it does work. The debugger window is in three bits - the top bit is the registers R0-R7 and the flag bits, the middle bit the disassembled code and the bottom bit the memory display.

It's a bit scruffy (it's actually the first piece of Java Swing code I've ever written beyond hello world stuff .....) but it does work. You can single step, set breakpoints, all that sort of thing. The display of the emulator consists of two windows, this one and the display screen shown in a previous post.

As you can see there is no actual code loaded yet. The next thing I want to do is to write a little demo program that tests the display, the game control keys, the beeper and so on, and also tests the emulator.

I might do that tomorrow, or maybe the day after, depends (real life interfering with important things again .....) but once that is done, I'll release a first working version so people can play with it if they like.